UK intelligence agency GCHQ has launched a code-cracking competition to help attract new talent:  potential applicants are invited to solve a  visual code posted posted at an unbranded standalone website: http://www.canyoucrackit.co.uk [ update – the website is not active in 2013 – the URL resolves to a 404 error page ]. The competition began in secret on  November3 , 2011 and will continue until  December 12, 2011 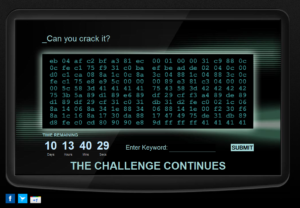 The challenge has also been trickled to social media sites, forums and blogs. A GCHQ  spokesman said the campaign is aimed to raise the profile of organization to an audience that would otherwise be difficult to reach. “The target audience for this particular campaign is one that may not typically be attracted to traditional advertising methods and may be unaware that GCHQ is recruiting for these kinds of roles,” the spokesman said. “Their skills may be ideally suited to our work and yet they may not understand how they could apply them to a working environment, particularly one where they have the opportunity to contribute so much.”

GCHQ said that once the code was cracked individuals would be presented with a keyword to enter into a form field. They would then be redirected to the agency’s recruitment website. It said it would still benefit because the resulting discussion would “generate future recruitment inquiries”.

For my readers, special note: anyone who had previously hacked illegally would be ineligible. The agency’s website also states that applicants must be British citizens. (Oh, well… Here goes my chance…)

This initiative came alongside the announcement  from Cabinet Office Minister Francis Maude about the New UK cyber security strategy being unveiled in the form of  new police Cyber Crime Unit to be set up to protect Britain against the growing threat of attacks on the internet and in electronic communications. Alongside the law enforcement unit, a new Joint Cyber Unit at the Government’s GCHQ eavesdropping center will develop the UK’s military capabilities in cyberspace  protecting “UK’s national interests from cyber attacks by organized criminals, terrorists, hostile states and “hacktivists”, according to Maude.

Here is a few comments on this topic that I liked:

Bill Walker: “This is nothing new. During the war, a cryptic crossword competition was sponsored by Bletchley Park code breaking centre to identify possible recruits. Even with the latest supercomputers, the human brain has a way of thinking laterally to join up seemingly unconnected sequences.”

BigStu78: “It’s good to see GCHQ get with the times. This campaign will reach more people than their usual Oxbridge graduate candidates. As for some people saying it will be harmful to national security, how? Just because someone breaks the code, does not mean they automatically get the job, they will still be subject to the stringent background security checks as all prospective GCHQ employees are.”