In Memoriam: RIP Steve Jobs, or Why I still have a Swedish Dictionary

Fate took a bite out of Apple.

I am not going to write who and what Steve Jobs was. There is no need for it. I am not going to describe his legacy in the industry and the world. I just want to share a personal story as my part in the tributes that are pouring into the internet, as the world grieves his passing. Is there anyone on this planet – except maybe some undiscovered tribes – who was not affected by Steve’s life’s achievements?

My first Jobs experience came into my life it the form of the Macintosh Classic back in 1989 when I worked for the Institute of Archaeography for the Academy of Sciences in Ukraine. My department had just gotten a few Macs, gracefully donated by the Harvard Ukrainian Research Institute. I have to tell you, for me and my colleagues in the manuscript publishing department, it was a mind-blowing experience. The concepts of multiple, moveable windows, and the single-unit computer were such a marvel to us (Macintosh’s single integrated processor and monitor design was available to the consumer way before then, and is still used now in the iMac line of computers).

I remember the first time I was able to hear music on the computer – it was a built-in feature, or use a design program – QuarkXPress  – I don’t think it even had any numerals attached to the name yet… How easily we could use formatting software to make plain text into a publisher-ready, formatted book! All those late nights we spent working overtime, just because we had Macs! It was awesome.

A couple of years later, we got Macintosh LC II. It had just been discontinued by Apple, but we didn’t care. Harvard was kind enough to pass them on to us, and we put it to good use. It was huge! It had a ton of room! 40 MB! And memory! 4 MB! And did I mention it was huge? I felt like a child in a candy store… Then I remember the day one of my colleagues brought in the monitor that could be used to rotate 90 degrees and display the whole page at once – which was great for authors, typist, designers and proofreaders to see the complete page display. I remember talking about Steve Jobs, and our discussions about Silicone Valley, college dropouts and opportunities in life. That same colleague ended up applying for a job at the Apple mission in Ukraine, and if I am not mistaken he has been working for Apple ever since.

in 1994, just after I came to the States, I wanted to have my own Mac. I was a student, had no credit and not enough money to buy a brand new computer, so I had to get resourceful. A friend of a friend was selling his old Mac. He was a genius perpetual student traveling from country to country on some genius-student grants. In his previous endeavors, when he was studying in Sweden, he got a Mac that was decommissioned and quite literally trashed (I guess there were no computer recycling laws back then) by some institute of metaphysics… or mechanics… I am not sure now, but the point was – he got it to work. Then he used it while in the States, and then he left it behind for me. For $300 – very little money for a Mac back then, but still a lot of money to me – I got myself a very used computer. I also had to get a Swedish dictionary, because that is what the operating system came in.

I did not care what language it was in. IT WAS A MAC.

Time has passed, I kept the dictionary, but I now use PCs in my everyday life. I need them for work, and I love them, too. But it will never be the same…

Apple Macintosh will always be my First Love. We all keep a little room in our hearts for the first love, and we always have little reminders of it in our daily life. My iPhone – the only phone I will ever use – is that reminder for me. 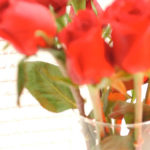 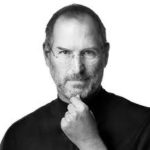 Thank you, Steve. Rest In Peace.